In April this year, I have paid a visit to one of the German blackcurrant growers, Michael Bullinger. All those who have attended our conferences have certainly already met him. He is always present (although discreet), and he was also part of the organizing team of the German conference in Waldenburg in 2013. His farm, “Obsthof Bullinger”, is in Kupfer, not far from Waldenburg. And it is a pure family business: no employees – only passion for blackcurrants. 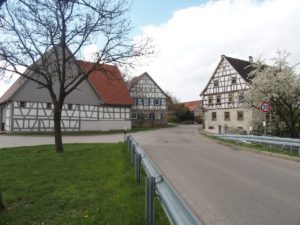 Entering Kupfer, Obsthof Bullinger on the left side

Michael grows blackcurrants on 70 hectares of mostly rented land, together with 35 hectares of red currants. “The share of blackcurrants is decreasing, whereas I am gradually increasing the red currants. Demand for red currants is getting higher, and the prices are better at the moment”, Michael tells me. We are sitting at a table, drinking blackcurrant juice and having a cup of coffee and a slice of homemade cake. His wife Anemone and his parents Rolf and Emmi are with us – I feel like at home. “We don’t have contracts with our buyers for blackcurrants. During the harvest, we negociate the prices with a big producer of blackcurrant juice, who always buys a big share of my yield. We have a relationship based on trust: he knows that my currants are fresh and of good quality. I always respect he authorized residue level of plant protection products. This is our way to work with each other.”

More than 10 years ago, Michael took over his parents’ farm. He has been trained as an industrial mechanic, but just like his father, he stayed with the family farm. Generation after generation, the Bullingers seem to have a passion for mechanics and love to fiddle about with machines. But their loyalty towards the farm is even stronger. 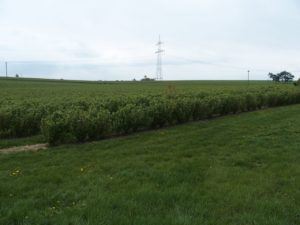 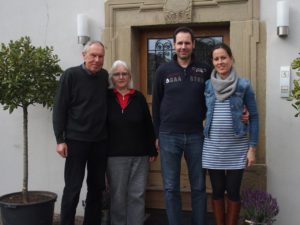 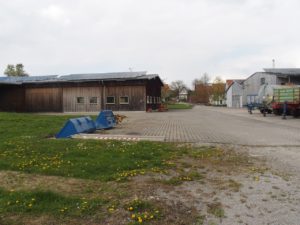 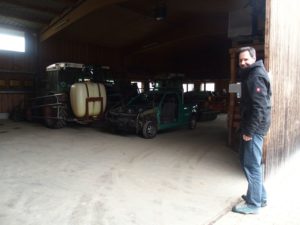 Michael opening the gate to his machinery

Blackcurrants in Kupfer – How it all started

Michael’s father Rolf confesses that his own passion for mechanics was one of the reasons why he started to grow blackcurrants. “My parents wanted me to take over the farm. But I didn’t want to have cattle, so I chose to develop the fruits we already had: mainly apple or pear trees, but also some blackcurrants and strawberries.” In the late 1960ies and early 1970ies, the market was favorable for blackcurrants. The growers got a very good price for their fruits – 5 Deutsche Mark per kilo (which would nowadays be worth more than 5 Euro). But they were handpicked! And whoever has already picked blackcurrants by hands can easily understand how fastidious it is – and the price was well justified. Rolf thought about specializing in blackcurrants, and needed to improve the harvest. Therefore, he worked on a machine that could harvest the currants. He built a harvester himself, with an existing chain saw that he adapted for rattling and removing the currants from the bushes.

Building up a German blackcurrant Association in the 1980ies

After his marriage with Emmi, they both specialized on blackcurrants only, and grew them on 75 hectares – which was almost half of the whole German blackcurrant grown surface. There had already been blackcurrant conferences on a European scale since the 1980ies. The German blackcurrant association is, by the way, closely linked to the Bullingers and would probably not exist without them. It was Rolf who created it in 1983.

In the same year, Emmi reminds, the Bullingers made a most memorable one-day-trip to Dijon (France) with a Cessna of one of their business partners. “We were told that there was an exhibition of blackcurrant harvesters, and that we should absolutely go there. Of course, it was interesting, but how could we go there? So he took us there with a plane, but we didn’t even know exactly where the exhibition was. Neither did we speak any French. When we arrived at the airport close to Dijon, we took a taxi. It was difficult to make the driver understand what we wanted, and of course, he didn’t know about this exhibition. We drove through the vineyards – and finally saw those harvesters. It was quite an adventure.” 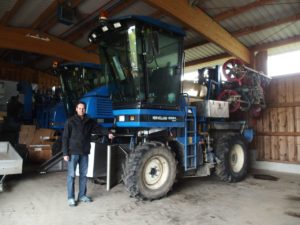 Michael Bullinger and one of his sprayers

Machines – more than a hobby for Michael Bullinger

Nevertheless, when it comes to blackcurrant growing, technical skills are most welcome: Michael has worked on his New Holland harvester. By making some changes, he is able to deliver very clean blackcurrants: no twigs any more with the currants! 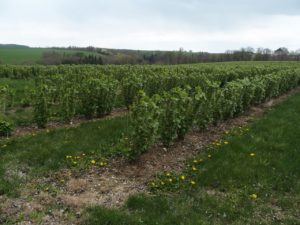 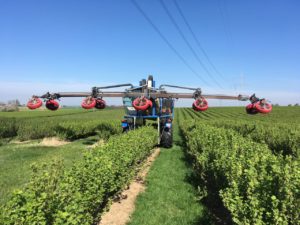 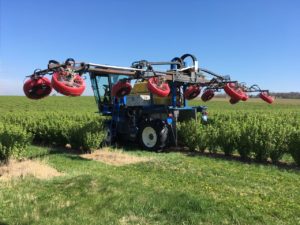 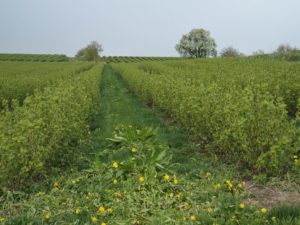 A tour of the farm – in cold conditions

We have finished our coffee, and Michael suggests to have a tour of the farm and his fields. It is quite cold outside for this season – and Michael is worried. The weather forecast predicts two very cold nights for the same evening already – and his currants are in full blossoming. “My yield will be decreased by 90% if we have such a strong night frost. -7°C will kill the currants.”

But not only the currants, also apples and pears will freeze – which are Michaels second income: his farm is a collecting point, where he is storing and fermenting the mashes for the production of industrial alcohol. “This has been done here for long years. But this year will be the last time. I want to stop this business and concentrate on my farming. Mashing my currants, which my buyers always fetch with their trucks, will be my focus. I don’t sell any blackcurrants for IQF.” Moreover, his parents are getting older. Without their help, Michael couldn’t face the work on his farm and for the collecting point. 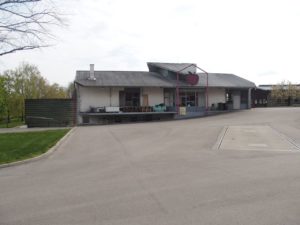 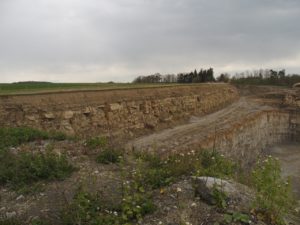 view of the soil around Kupfer

Michael Bullinger and his blackcurrant fields

Michael drives me through his fields, and black or red currants are all around the hilly landscape. The soil is not perfect, as he confesses. The layer of fertile land is not deep, and not all varieties grow well. He had a very bad experience in 2015 with Ben Hope, which completely dried out with the heat – whereas normally, it gives very good results. Michael chooses the varieties according to their sugar and acidity content. But of course, agronomic aspects take over. Variety Tiben doesn’t give a good yield, and Michael now decreases the 16 hectares he had already planted with them. 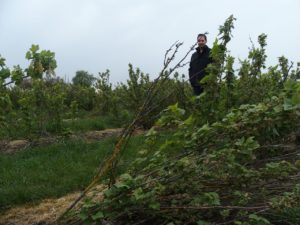 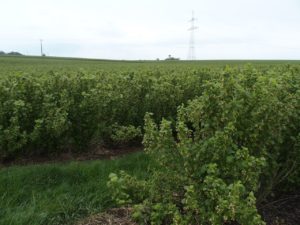 He looks concerned, while walking through his field of flowering Tisel. “They will all freeze tonight”, he declares. “But whatever, that’s how it is. I will have less work in July then – and more time for my machines, hobbies, and of course for my wife and third baby to come”, he smiles. “Next year will be better for my blackcurrants.” 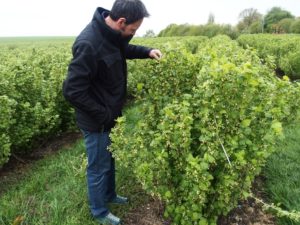