Blackcurrants: More to offer than we think

For several years, the IBA has had pleasure in listening to the presentations of Mark Willems. In fact, his research at the University of Chichester (United Kingdom) has lead to astonishing findings on the antioxidant effects of blackcurrant. The ongoing research on the reduction of oxidative stress during exercise (and more) is captivating! Here is a bit of what he wants to share! 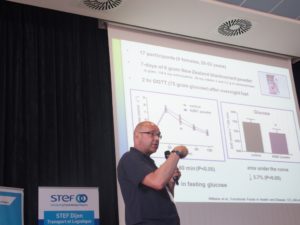 Health benefits from antioxidant properties of the blackcurrant

Anthocyanins – the center of attraction

About 7 years ago, we began exercise physiology studies at the University of Chichester in the United Kingdom. Until 2013, only one study from Plant & Food Research in New Zealand, had examined effects of blackcurrant intake after exercise. And that was in 2009!

We have also shown that blackcurrant can better exercise performance from high-intensity repeated sprints to cycling as fast as you can the distance of 16.1 km.

One of our recent studies showed that blackcurrant reduces the production of 2-nonenal. This is a so-called volatile organic compound emitted by the skin and produced by oxidative stress. What is even more important is that 2-nonenal is a compound that is causing the body odour in older people. There is also evidence now that blackcurrant can reduce blood pressure in older adults.

Globally, you can see that the research on blackcurrant has provided some remarkable findings with application for sport and exercise. But likely also for well-being. There is still so much to explore, and I expect that more scientists will take interest in examining the effects of blackcurrant in humans.

Blackcurrant has still more to offer than we think.

Further reading on the research of Mark Willems (and more)